Food and nutrition occupies most people’s minds to varying degrees. We all have our opinion when it comes to different foods and which ones we should and shouldn’t be eating. However, many of us carry around misconceptions about the nutritional science that informs our decisions. Nutrition is an extremely complex and relatively new subject. Science is constantly evolving and so too must our opinions. In this blog, we’ll tackle some persistent food and nutrition myths that influence people's eating behaviours.

#1: Breakfast is the most important meal of the day

Ask most people what the most important meal of the day is and they’ll say the same thing: breakfast. But is it really?

There is no clear cut evidence supporting the belief that breakfast is the most essential meal. A recent study revealed the effect of breakfast on one's weight and metabolic rates did not differ between overweight people and people of a regular weight when skipping and eating breakfast.

Previous studies have suggested that eating breakfast is a key link when it comes to maintaining a healthy weight level, however these have been noted as observational findings due to the fact they may reflect the wider healthy food and lifestyle decisions of the individual.

#2: You should count calories

Not all calories are created equal. Have you ever heard of the phrase quality over quantity? Well nothing is better to keep in mind than that when understanding calories.

Foods that have the same quantity of calories more often than not are of different nutritional quality, which will have a different effect on your body in terms of things like metabolism, hormone levels and your appetite.

Lets give you an example: you consume 200 calories worth of sweets. Simply put those calories are not going to have the same effect on your appetite as 200 calories of chicken. They are less satiating and will spike your blood sugar levels. This could lead to overeating later in the day due to a lack of dense calories, which may affect your ability to achieve a calorie deficit needed for losing weight (if that was ultimately your goal).

It is important to not get caught up in counting your calories because at the end of the day you must consider can one really accurately measure a calorie?

A recent study revealed 12% of adults only were able to accurately estimate the number of daily calories needed for their age, height, weight, and physical fitness levels.

With all the gadgets and apps out there can they really get that deep inside your body to know the effects of food and physical activity on your body?

Rather than worrying about your caloric intake, focus on the type of calories you consume. It is really hard to overeat on foods such as lean proteins, vegetables, and complex carbohydrates. Focus on eating such foods and you’ll find that you have more energy and feel better throughout the day.

#3: Going vegan is the healthiest diet

Adopting a vegan diet is fashionable at the moment, with more and more influencers and celebrities opting for a diet without animals. Though there is a moral argument to be made about the choice to go vegan, it may not be the healthiest option for your body.

According to scientists, much is not understood about the diet, most importantly about the long-term consequences of not eating animal proteins.

When consuming a vegan diet you are at a higher risk of developing a Vitamin-B12 deficiency (due to the nutrient being only naturally available from animal foods). Such a deficiency can cause damaging neurological effects (e.g. higher risk of stroke).

Experts have also said the diet is too restrictive for athletes competing in high level sporting competitions due to the possibility of becoming malnourished and unable to maintain muscle mass.

Another myth that has been around for years and years is that of night time eating being linked with weight gain. Is it best practice to not eat after 8pm? Well in reality it’s more about what you eat than when you eat. Our bodies will store any extra calories as fat, so regardless of the time of day whether it be day or night, if your calorie intake exceeds your calorie output (burned) then you are stimulating weight gain.

Studies have shown that if you adhere to your body's daily caloric needs when eating at night then no weight gain will be experienced. The British Medical Journal recently reviewed the results of various studies on this topic which were carried out worldwide and concluded that there is no correlation between weight gain and night time eating.

The truth is we are highly influenced by inherited and deeply ingrained myths about food and nutrition that can be extremely difficult to reverse. Nutritional science is improving at a rapid rate leading us to disregard the false concepts regarding food learned by previous generations. We urge you to educate yourself about food and nutrition from credited sources and not to believe everything you hear. 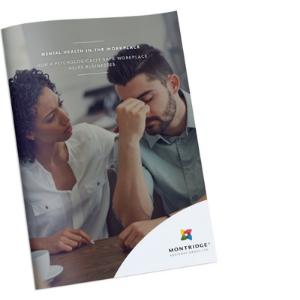 Mental Health In The Workplace

Workplace mental health is a complex subject that affects every aspect of your organization. After reading this whitepaper, you will learn how a psychologically safe workplace helps businesses.